Looking For Arm Exercises to Do With Heavy Weights? A Trainer Recommends These Four 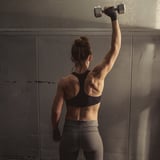 Charlee Atkins, CSCS and founder of Le Sweat, doesn’t want women to be afraid of picking up the heavy weights. Why? She said that burning more calories – getting more bang for your buck – and toning your muscles (bulking up, by the way, is extremely difficult to do) are obvious reasons. But, what’s rarely at the forefront of women’s minds, especially younger women, Charlee noted, is that lifting heavier weights will create stronger bones.

“Loading the body of course makes muscles stronger, but the bones are benefitting, too,” Charlee told POPSUGAR. “Women are more susceptible to osteoporosis later in life, and numerous studies have shown that weightlifting can help play a role in slowing bone loss.” Approaching fitness not just for “in the moment results,” she said, is important. That’s why she posted a series of suggested arm exercises for strength training.

In terms of choosing the right weight, Charlee said that everyone is going to be different, since we’re all at varying strength levels. If you’re doing what she calls a “true strength-training routine,” meaning three sets of eight to 12 reps, weight selection should be heavy enough that the final reps of every exercise for all sets is challenging. For the final two or three reps of each move, your exertion would be no lower than an eight on a scale of one to 10, she said.

As seen in the series of Instagram videos above, Charlee suggests doing eight reps of the following exercises:

Charlee said that if you want to make this a workout, you’d do three rounds of eight reps of each exercise (i.e. go through exercise one through four, then complete two more rounds). Since the final few reps for each exercise should be challenging, she suggests taking up to two minutes of recovery between each move before moving onto the next. You can also, she said, rest for two minutes between each round.

Charlee noted that if you’re recovering quickly, that may be an indication that you are ready for heavier dumbbells. She noted, too, that the weights for each exercise will differ. The overhead press and the bent-over row would use the heaviest dumbbell selection, whereas the triceps extensions would use the lightest dumbbell, and the floor press would use tad bit heavier weights.

The reason for this, Charlee explained, is that you’re able to lift more weight the more muscle joints you’re using to perform an exercise. “Arms exercises either have you ‘pulling’ something toward the body or ‘pushing’ something away,” she said. “We want to be strong in both, and strength will depend on the angle of the pull. Are you pushing overhead, pushing from the chest, grabbing on an angle, and how many joints are involved?” In the overhead press, for example, Charlee said you’re using your shoulder joint, including the scapula, and the elbow joint. In triceps extensions, you’re mainly only using the elbow joint.

You can do these exercises at home if you have access to weights or, of course, at the gym. Starting with eight reps is a good number, and Charlee suggests staying within that eight to 12 rep range. The key, too, is progression. So, when you feel yourself getting stronger, up the resistance. Plus, here’s a four-week beginner’s weightlifting plan, and you might want to check out these strength-training workout videos from YouTube.